A beetle drive is an old-school fundraising event that involves shouting out, making it a lively and sociable activity for the whole family to enjoy! 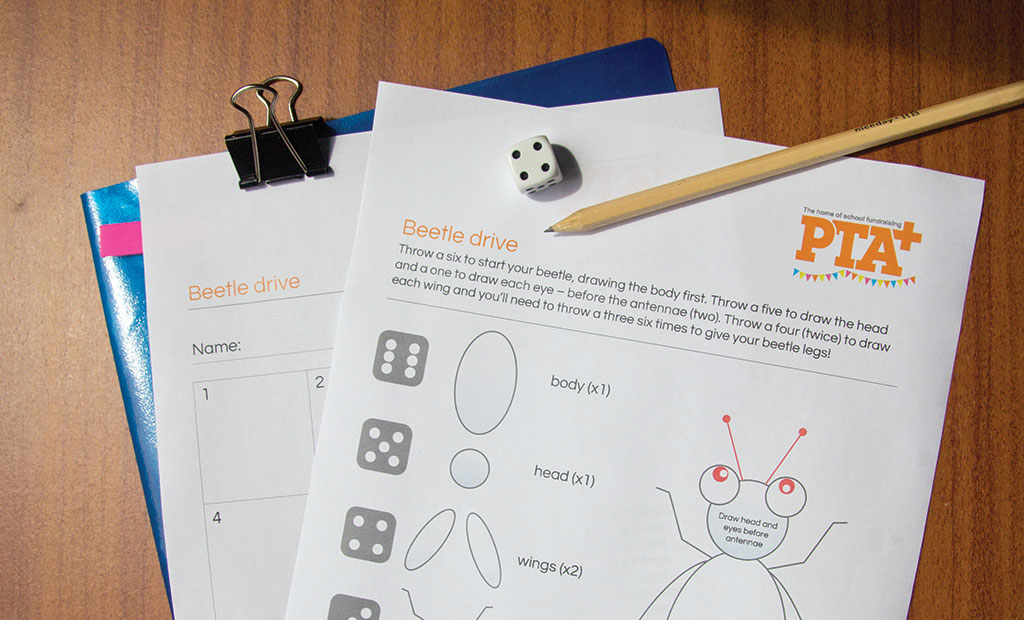 'Beetle' is quite a simple game of rolling dice and drawing a beetle, but when you run it as a beetle drive you add in the element of moving tables after each game. It makes for a lively and sociable event

Tips and advice for running a beetle drive

Number your tables and sit two to four players at each table. The youngest player rolls the dice first. Play continues in a clockwise direction, with players throwing the dice in turn and drawing body parts of the beetle depending on the number they have thrown. There are a total of 14 body parts to draw. You must draw the body before anything else, so you can't start until you throw a six. You must throw a five to draw a head before you can draw the eyes and antennae.

The first player from all the tables to draw a complete beetle shouts 'BEETLE!' and scores the maximum 14 points for that round. Everyone else counts up how many body parts they have drawn, and scores one point per body part. The person with the highest score per round from each table moves up a table, e.g. if the winner is on table one, they move up to table two. The person with the fewest points in each round moves down a table, e.g. if they are on table six, they move down to table five. If your top table is number 12 make sure they know they move up to table one and table one moves down to table 12. At the end of the beetle drive, the winner is the person who has scored the most points from all the games added together. If there is a tie, the players with the same number of points roll a die - the highest number wins.

Note: Remind players that it doesn't matter what their beetles look like! Go through the rules clearly before you start and ask if anyone has questions.

'We have held a very successful beetle drive for the last few years, setting up the assembly hall in rows, with two desks facing each other in a square. This allowed four people, or two teams to sit to play a game. Team members sat beside each other, with one team moving anticlockwise at the end of each game along the rows. Our caller sat on a platform at the front of the hall. We managed to fit in six rows of six squares, giving us a capacity of 144 people. Some parents and children paired up in teams, but older children were a bit more confident playing together without adult help. The event was fairly straightforward to organise: each player needed a beetle card, divided up into games or rounds with cumulative total column. They also needed a pencil to draw their beetle, and each table required a die and a cup to throw it from. We gave plenty of spot prizes after each game. There were also two overall prizes for the highest scores and two wooden spoons for the lowest. We played 12 games. After the eighth round, we took a break so children and parents could indulge in light refreshments. We served tea or coffee and a traybake (kindly donated by members of the PTA) for the adults, and juice and a traybake for the children. The cost of this is covered by the entry fee of £2 but we asked for extra donations as well to boost profits. All in all, we made £250.'