Home / Running a PTA / Community engagement / Get your Head in the game!

Get your Head in the game!

Boost support by getting your headteacher actively involved in the PTA 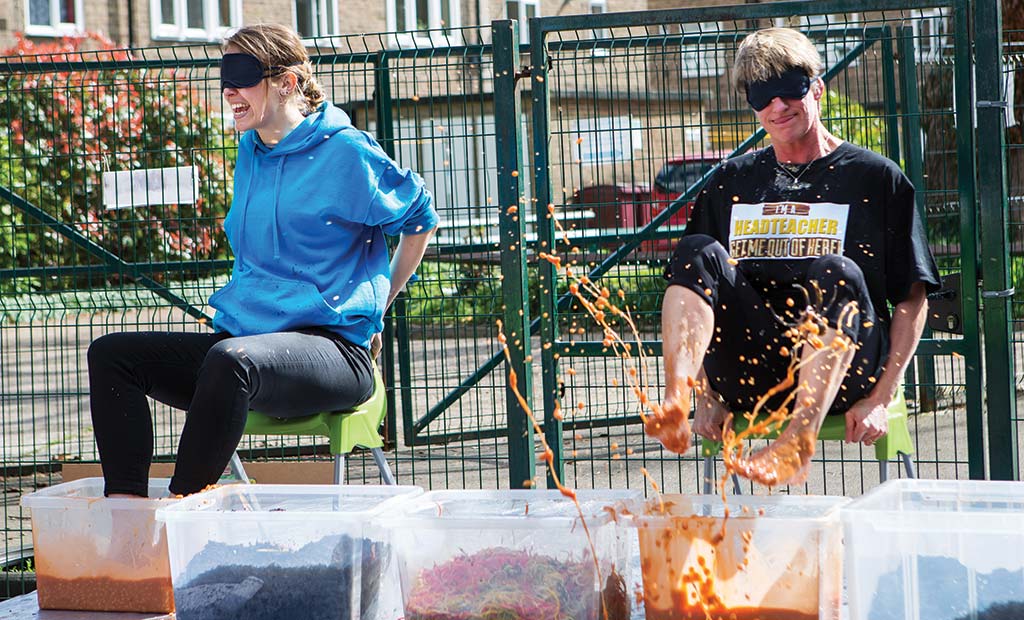 The relationship between the school and the PTA is crucial. And a public show of support from the Headteacher tells parents, families and the community that the PTA's efforts are valued, which, in turn, boosts support and donations. Your Headteacher's backing is also pivotal in setting an example and leading the way for other teaching staff to support the PTA. Giving your cause their backing stops the school and PTA seeming like two separate entities, but what's the best way to demonstrate this? In a fun way that will boost awareness and fundraising at the same time!

Whether it's being sponged in the stocks, gunged in a tank or taped to a wall, getting the Headteacher involved in a visible way will entertain children and adults alike. While some ideas will work well independently or in school time, doing something at a big event such as the summer fair will spread awareness to more people, and can also act as a 'headliner' to attract visitors. The more memorable the moment, the more people will talk about it. Show your community that the Head is willing to put their neck on the line for the PTA, and they will understand the integral role you play.

Break a record: If there's one place you're sure to find plenty of ideas, it's Guinness World Records. How about most balloons burst in 30 seconds, the fastest 100m on a space hopper or eat as many M&M's as you can in one minute using only a chopstick? You might not set a new world record, but you'll certainly have fun trying. Get people to pay per guess, by preparing a list of likely numbers, times, amounts, etc. Seek sponsorship to boost profits.

Pupil payback: Get pupils involved by asking them to design a silly outfit for your Head to wear at your fair, charging them £1 to submit their design. If that's too risky, they can pay to vote for an outfit from some approved designs. Alternatively, sell raffle tickets, with first prize being the chance to have free rein with the Head and a palette of face paints!

Tape good times: Offer pupils the chance to buy a strip of duct tape to stick their teacher to the wall and they'll be queuing up. Charge £1 per strip, making sure the pieces are long enough to stick well (aim for about a metre). The aim is to see if the victim will stay attached to the wall once the chair they're standing on is taken away. Long sleeves and trousers and a crash mat are a must for this one.

Baked beans: Fundraisers involving baked beans are cheap, fun and very versatile. You could do anything from making your Head squelch around in bean-filled wellies to getting them to sit in a bathtub full of beans for the duration of your summer fair! Seek sponsorship on the understanding that a certain target needs to be reached before the Head will agree to subject themself to the proposed indignity!

Stocks: Sponging teachers in the stocks is a classic way to get staff and pupils involved – and what child wouldn't love the idea of throwing a soaking wet sponge at their teacher? Set up an area at your event and charge around £1 for three throws. Supporters can sponsor teachers to be soaked, with a more important member of staff being elected to be sponged for every monetary milestone reached. When your top target is achieved, it unlocks the Head!

Gunge tank: A gunge tank is a brilliant finale to any fair, and a sure-fire way to attract visitors! All that's needed is a chair and a bucket of something slimy – rig up your own tank or hire one (complete with lever!) for the occasion to ensure a great show. Raise funds through sponsorship, boosting profits with a silent auction where supporters can bid for the chance to release the gunge.

Sponsoring your volunteer (or victim!) in advance is a great way to get money rolling in before the big day. Drumming up support in the run-up will get everybody talking and promoting the event, which, in turn, gets the word out to more people. Setting up an online donation page means a wider circle of potential donors can contribute. For most ideas, you can even agree on a milestone amount that needs to be raised before your Head will go through with it, meaning their sacrifice won't be in vain! There's a lot of potential in sponsored fundraisers, so think about how you can make it work for your event. Perhaps the more money that's raised, the worse the task gets, or a pledge of say £50 or more earns the donor the chance to lend a helping hand to the proceedings.

I'm a teacher, get me out of here!

'In order to raise much-needed funds to support the school's work with a speech, language and communication specialist, our fun-loving head came up with the idea to hold an I'm a Celebrity-inspired event, where she competed against staff members to complete messy challenges!

I organised the event together with my husband. We coordinated a team of parents who held some 'top secret' meetings to devise the challenges, taking charge of one each. As the trials were to be kept secret from the teaching staff, we had to set up the whole thing without their involvement. The admin team, who wouldn't be taking part, helped us sign off key ideas – funnily enough they seemed very happy to do this!

We realised that there had to be a focus on "yucky" rather than "scary", as our children are age four to eight, so we had to be careful that they wouldn't find any of it too upsetting! We tried to think of things that were tricky yet entertaining. The equipment, which included tinned beans, Tupperware, old clothes, water balloons and manure, was all donated.

In the end, our trials included messy dressing up in jelly wellies and custard-filled hats, shaving foam-filled balloons, fishing shapes out of porridge with your mouth and a water balloon-bursting challenge. The worst was the blindfold taste challenge involving stinky cheese and sardines! It all finished with a 'Gangnam Style' tiebreak dance-off, and the teachers were crowned the winners.

We used ParentMail and the school newsletter to get the message out, as well as using the parents' Facebook network. Our class reps were able to rally support directly. We gathered donations through an online page, which also meant my husband's company would match-fund the first £500 of donations.

It was a lot of work, but turned out to be the most gunky, gungy, stinky, family-friendly fun, and the children loved every minute. We raised a grand total of £3,724.69!'

'With just under 100 pupils, our school has a small, but perfectly formed, community. At the helm is Mr Ben Tucker, who is fully supportive of the Friends of Wraxall School Association and willing to do just about anything for fundraising.

It quickly became a tradition that some activity involving Mr Tucker caps the annual summer fayre. One year, he was in the stocks being sponged by students. His good humour and students' poor aim meant a lot of repeat custom! Another year, Mr Tucker grew out his beard, and we held a raffle, with the winning student getting to choose the style of his new beard. "Wolverine" was the winner, and Mr Tucker duly allowed himself to be groomed into a Hugh Jackman lookalike. The short activity raised over £120, which is amazing for our little school, especially as there was almost no outlay or effort! This was ideal, as there are so many other things to organise for the fayre.

Apart from activities at the fayre, Mr Tucker has led the teachers in joint "Wacky Races", with he and the teachers having to put on articles of clothing and even makeup as they race along the school field. He's also taken part in the Ice Bucket Challenge and music videos. Every activity we do with him varies in type and effectiveness, but even the less financially successful ones are valuable because they demonstrate his commitment to the fundraising that we do and lead the way for others to get involved.'

A cut above the rest!

'As we have both infant and junior schools, we have two headteachers to show their dedication! They did this publicly by getting involved in our Amigo's Fundraising Magic Show. We held two shows in one evening, one for each school, with a spectacular Headteacher trick at each. We warned them ahead of time so they knew what they were letting themselves in for, although they feigned horror during the show! The Head of Juniors was sawn in half, to much shrieking and gasping from the audience. The Head of Infants had a hole drilled through her and a tube passed through her stomach, through which water was poured!

Simon (AKA Amigo) is really fun, loud and gets the children involved. He made the planning simple by providing us with lots of resources and guidelines to promote the event, so all we had to do was sell tickets beforehand. Our capacity was 200 for each show, and we had two sellouts on our hands. Both lasted an hour, and Simon adapted his content perfectly to suit the different audiences. Ticket prices were £5 for children and £7 for adults, and we also offered a £20 family ticket. It was a fantastic evening with lots of laughter and the children were absolutely captivated – the adults loved it too! For very little time or effort we made over £1,000 profit, and we will definitely be holding this event again!'